Len Greenhalgh was born and raised in Manchester, a large industrial city in the north of England. At the age of 15, his parents, and sister emigrated to the U.S. and settled in Windsor, Connecticut. Len completed his secondary education at Kingswood School in West Hartford, then went on to Rensselaer Polytechnic Institute in Troy, N.Y. to study engineering. He soon discovered that he had much broader interests than the narrow curriculum at RPI could offer, however, so he transferred to the University of Rhode Island, which had a highly rated program in oceanography and biological sciences.

His progress toward graduation was derailed by a car accident during his senior year. The passenger side, where he was sitting, was crushed, putting him in a wheelchair for several months. Not being the type to sit idle for very long, he obtained a "desk job" in a purchasing department, and thus began his business career—literally, by accident. When he returned to complete his baccalaureate, he took business electives, and, based on the quality of his coursework, was subsequently awarded a full scholarship for an MBA degree.

His doctoral training was equally unplanned. He was burned out from doing management consulting all his waking hours, and was looking for a career change when a Cornell University professor, with whom he had worked, invited him to apply to the Cornell doctoral program. Driven by broad intellectual curiosity, Len focused on business, conflict resolution, and psychology, but continued to explore a wide range of disciplinary areas while in the university learning environment. Ten years after completing his PhD, those same interdisciplinary interests led him to participate in a Post-Doctoral Fellowship program at Dartmouth Medical School, which gave him an in-depth understanding of the human psyche and insights into how individuals experience roles, relationships, and interpersonal conflicts.

History of supporting the causes of minorities and women

People often ask Len how, as a white male, he became so deeply involved in the programs for minorities, Native Americans and women—to the point that this has become his life's work. His involvement with the social justice movement began in the 1960s, when he was shocked to see, first-hand, how minorities were treated in the South, and when civil rights became an issue on college campuses. He was inspired by the words and work of Dr. Martin Luther King, Jr., but student activists couldn't make much of a difference in those days, without taking their lives in their hands. (The murders in Philadelphia, Mississippi were current news, and TV coverage showed the savage treatment of protesters by the law enforcement officials who were sworn to protect them.)  So after others had done the really hard work in desegregating the United States, Len was left with the sense that he hadn't done enough. But now, as a tenured senior professor at a premier Ivy League business school, he is in a position to make a real difference.

Tuck's minority business initiative—having celebrated its 31st year, with more than 5,000 program graduates from all 50 states—seeks to maximize the potential of minority-owned businesses, and also improve the economic well-being of the communities that have large concentrations of minorities. As Director, Len has grown it into the largest minority business program of its kind in the world.

Len Greenhalgh is also highly committed to improving public policy, supplier diversity programs, and support organizations to maximize the success of traditionally disadvantaged businesses.  He was presented with a Lifetime Achievement Award by the Minority Business Development Agency, U.S. Department of Commerce for his contributions in this domain, and has received much recognition for his role in creating a different future for minorities in the U.S. economy. 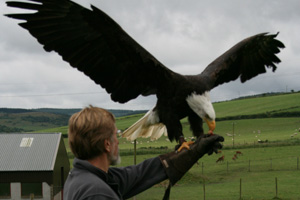 Len developed an interest in the natural environment early in life, as a result of his father taking him on "nature walks" in the English countryside. In the 1960s, he became aware of the growing extent of environmental damage and habitat destruction. This was a time of dismay and frustration, because there wasn't much he could do about what was happening. But his doctoral training and evolving expertise in negotiation—combined with his undergraduate coursework in ecology—have positioned him to make a difference in the land preservation movement, which has grown in importance as the relentless pace of development has encroached on what little of the world's natural areas remain undisturbed.

Len has designed and taught in educational programs for environmental organizations. He and his good friend Max Bazerman (professor at Harvard Business School) have partnered to teach land acquisition professionals—at The Nature Conservancy and other environmental preservation organizations—how to negotiate deals to save land while extending financial resources to as many projects as possible. This pro bono work has extended down to the local land trust level, and also has involved consulting on negotiation strategies for some very large and complex land-acquisition initiatives.

But Len does more than teach others how to negotiate conservation deals: he has developed and now runs a wildlife refuge on the coast of Maine. Creating habitat involves digging large ponds, building nesting islands, planting vegetation for cover and nutrition, and reversing the effects of environmentally unregulated granite mining that took place on part of the acreage during the past century.

Species that now live on or pass through The Clark Island Wildlife Refuge are nesting ospreys, otters (who feast on the trout in the lake), Canada geese (a nesting pair ten years ago led to a current flock of more than a hundred), ducks (too many to count, largely because they mill around), moose and black bear (occasional visitors), deer, fox, muskrat, mink, coyotes, herons, swallows, kingfishers, sandpipers, terns, and many other animals. Turning developable real estate into a wildlife refuge has created biodiversity in a scenic setting where there would otherwise be only high-end summer homes with manicured but barren landscaping. 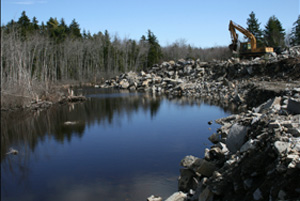 The Clark Island Wildlife Refuge covers 50 acres adjacent to Len's house. This means that landscaping improvements are usually done on a large scale. Early in the development of the refuge, Len was paying earthmoving contractors to do this work, but he figured out that it would be more cost-effective to do this work himself. So he began acquiring pieces of heavy equipment. Machines like excavators, bulldozers, and dump trucks are extremely expensive if you buy them new, but can be bought at reasonable prices when they are almost at the end of their useful lives.

The biggest machine is a Caterpillar excavator. It weighs about 100,000 pounds—50 tons. It can dig ponds quickly, and can easily move very large granite blocks. The smallest of the eight machines is a Suzuki 4-wheeler, which serves as a lightweight tractor and all-terrain service vehicle. Len owns up to having fun with these machines at the same time he is increasing the habitat (and aesthetic) value of the land. He says, "When you're young, you get to play with Tonka toys in a sandbox: when you're older—and don't have to put kids through college—you can play with the full-size machines in your backyard."

The project he has been working on for 25 years is restoration of coastal land that was destroyed by clear-cutting and strip-mining. Acres of what was once coastal wetlands habitat were destroyed during the early 19th century by unregulated granite mining.  Debris was dumped thirty feet deep onto stream beds and wetlands, leaving once-productive habitat looking more like a moonscape than an ecosystem that would support wildlife. Restoration involves moving thousands of tons of debris, then planting vegetation to maximize habitat support.  Everything is large-scale, hence the real need for large earth-moving equipment.

A builder of stone walls

Everyone needs a hobby. Everyone needs exercise. Everyone needs an outlet for his or her creative energy. Being generally short of time, Len has met all three needs at the same time by building stone walls at his home on the coast of Maine. There's a good supply of stone on hand, because a defunct granite quarry is located on the property. All he has to do is develop a plan, select appropriate-sized stones, transport them to the building site, and set the stones in place. It sounds pretty straightforward, but in practice, building a stone wall with irregular granite blocks is like putting together a 3-dimensional jigsaw puzzle.

The walls have functional as well as aesthetic value. Built as retaining walls, they stop soil erosion. They also create flower beds and define pathways. Len has built over half a mile of finished stone wall. On average, he has to put in half a ton of granite per foot of wall length, which explains why he isn't overweight: granite is the densest rock on earth, weighing over 180 pounds per cubic foot. His longest wall section is 250 feet, with three built-in stone staircases, one of them curved into a spiral. His most complex project involved building a long ramp for goslings and ducklings to get from the lake to the higher-elevation feeding areas before they develop their flight feathers. 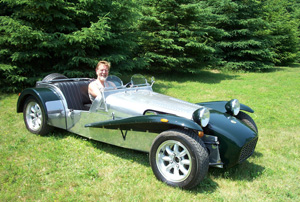 Len is very much a product of the 1960s. In addition to everything else that was fun about the 60's, that was the era of hot-rodding, muscle cars, and sports cars. Len didn't have much money in those days, but his father was a self-taught, highly competent mechanic and tutored Len in how to take apart and rebuild motor vehicles. Of course, Len was interested in rebuilding them so that they would go faster. This led to his becoming a mechanic on a race car pit crew, then a race car builder, and subsequently a driver in road racing events.

He abandoned that career path in the early 1970s, but never lost his fascination with cars and motorcycles. Professionally, this has been helpful: he has worked closely with auto manufacturers—notably Jaguar, Mercedes-Benz, Ford, Chrysler, General Motors, and Toyota—as well as with many suppliers. He understands the industry from an engineering, technical, and cultural perspective as well as a business perspective.

He rode motorcycles for 30 years. He developed his basic skills on dirt bikes, moved up to Japanese superbikes, and, after narrowly avoiding doing himself in on those high-performance road bikes, moved up to Harley-Davidsons. That was long before it became respectable to ride Harleys, back in the days when Harley riders were a close-knit fraternity of people the general public assumed to be disreputable (and often were). That led to many adventures an Ivy League professor wouldn't otherwise have enjoyed. It became less fun when affluent professionals started riding Harleys, and Len sold his last Harley in 2002.

He replaced the Harley with an antique car that offered as much of a wind-in-the-face riding experience: a Lotus Super Seven. The Lotus is very low and lightweight, so its powerful Cosworth-Ford engine makes the car fast and nimble. Later on, the financial meltdown of 2008 was a good time to buy exotic cars at highly discounted prices, so his hobby vehicles now represent the pinnacle of automotive sculpture. Today, however, his daily driver is a small hybrid car: all decisions have carbon consequences, so it is irresponsible to have hobbies that are indifferent to environmental impact.